So last night I was out on my run, trying to squeeze in a shorter one before a date with my geek. I was thrilled with my pace – at the end of mile 1, it was the fastest I’ve had all year. I decided to keep the run to just 2 miles & headed back. I managed to maintain the same pace until about the last half mile or so, then found myself dragging a bit.

It’s usually at that point that I start having conversations with myself. Some examples from last night…

Dude, are you walking your CAT on the trail on a leash? Oh, FFS, H3Dakota – that’s not a cat! It’s a wee grumpy dog with a really long tail!

Quarter of a mile left… that’s only 2-3 minutes! Damn, wish I had my phone, I’d listen to a song to keep my mind off it. I know! I’ll sing a song in my head! What song do I know all the lyrics to?

So many nights,
I sit by my window…

Dada da dada da da dada…  hey, what a minute!  WTF brain?! Did you SERIOUSLY just do that to me? Of all the damn songs in the world that you know, you had to go & pick You Light Up My Fucking Life to latch on to? Trying to pick up the pace wasn’t torture enough for ya?? How about some Green Day or Mumford & Sons?! GAH.

Honestly, it was the damn Stay Puft Marshmallow Man all over again.

Doctor Who: Dark Horizons by J.T. Colgan – as many of my readers know, I’m a slight Doctor Who fan. Well, ok, fine, I’m a HUGE fan. Not so much over the 11th Doctor though – up until recently. My biggest complaint is the writing for his stories, both on TV as well as in books – most stories have Amy being the clever one, which just irks the hell out of me. This story features 11 on his own, however – and the Doctor is back to his usual clever self. Plus, Vikings & an island destined to become part of Scotland?  WIN! 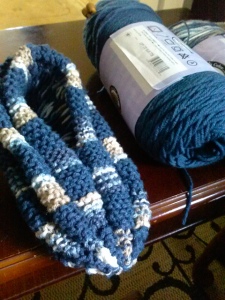 I finished up my geek’s slippers rather quickly. :) The oldest manlet has been asking for some fingerless gloves (well, nagging, really), so next up will be a pair of Men’s Convertible Mittens – though I’m not sure he wants them to be convertible.  :) He was very specific on the requirements though – he wants them out of worsted weight yarn, must be fingerless and the yarn has to be “fuzzy” and brown, with one finger in red. Enter Rowan Kid Classic.

I’m surprised there aren’t any projects for this sweater, it’s quite nice!

* Crocheted peeps! The only kind worth having. he he he

I really like this one, it looks so comfy!

* This guy reminds me of the Abominable Snowman from the classic Rudolph tv show! LOL

These mitts look so warm & smooshy!

3 Responses to Conversations with Myself